Vegan and the Living Is Easy

Join me, Ginger Burr, a long-time self-described health nut and image consultant, and Marion Davis, a former serious meat eater and self-esteem guru as we explore the ins and outs of  being a vegan on our talk radio show “Vegan and the Living Is Easy,” — every other Monday evening at 8 pm(eastern)

On Monday, Dec. 28, we are delighted to welcome Leanne Mai-ly Hilgart, founder of Vaute Couture.

If you have ever tried to find a stylish, cruelty-free winter coat, you know it has been the one hold-out to a truly “easy vegan” lifestyle. Well, not any more. Join us as we talk with award-winner, Leanne Mai-ly Hilgart, founder of Vaute Couture, the first and only vegan winter coat line to exist. We’ll discuss what prompted her to develop the line, what’s wrong with wool, and how being vegan does not mean you have to sacrifice style and much, much more.

at once chic, warm, and completely conscientious. After 8 months of fabric research for a vegan alternative to wool that was slim & pretty but ready for a Chicago winter, she ended up with a brand new technology fabric that is wind/snow resistant, designed to retain heat, and completely recyclable and vegan, lined in a windproof 100% recycled closed loop zero waste ripstop. The line is limited run and only 25 of each color and style have been produced for the launch.

One style, the Vaute, of Leanne’s line has been named one of 22 best new coats by Chicago Magazine, and donates all net profits to the Farm Sanctuary. Celebrity fans include Alicia Silverstone, Emily Deschanel, and Ginnifer Goodwin.

Leanne has been vegan since she was 17 and vegetarian since age 10, her background is not in fashion but in activism and start-ups, as she has been advocating for animals since she was 8 years old and helped push a bill into law at 17, for dissection alternatives in IL schools. She has been named 20 under 30 by VegNews Magazine and featured in Entrepreneur Magazine and the LA Times who said about Vaute Couture, “Vegan fashion takes a turn for the stylish.”

This is a great opportunity to learn more about how to be a stylish vegan and why you would want to in the first place!

You can call in and listen (and ask questions) on your phone or on your computer.  You will find call-in details here: 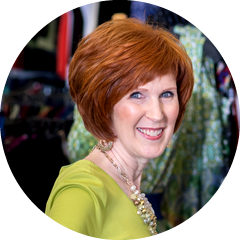 Learn how to stop wasting money on things you never wear.
Get Ginger's free e-book and bi-weekly newsletter with fashion secrets: